Find the hidden song lyric in this blog post, be the first to post the correct song name and band on our Facebook page and win a little something from Edison Electric…

Back to the electrical storytelling… Many times our electricians go on service calls and get the question, “I just moved here and I have no idea what this switch controls, can you look into it?”  Usually the answer lies in a quick glance at the ceiling – if there are no light fixtures on the ceiling, chances are good that the mysterious switch controls half of an electrical outlet.

We had a customer who had just purchased a home and was puzzled by the odd behavior of his living room outlets and in particular, the outlet next to his recliner which he used it for charging his 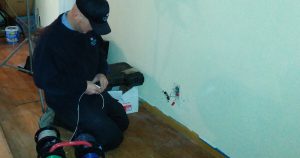 We quickly discovered that the outlet was being controlled by a set of switches on opposite sides of the room.  The solution: Our electrician replaced the living room outlets and made the top and bottom plug hot all the time.  We then used the wall switch locations to control new recessed can lighting…with a dimmer switch of course.  Having all the plugs in his living room hot all the time made things more convenient and a lot less confusing.

When your lights and outlets are not working correctly, don’t yell “Superman where are you now?”  Call on Edison Electric instead – 612-385-7864.  We’ll take the confusion out of your electrical system.

COVID-19 Alert: Our Commitment To Our Customers And Our Team - We Are Here To Serve You! LEARN MORE
MENU